Shakhtar Donetsk are expected to reject Arsenal‘s improved bid for Mykhaylo Mudryk as Chelsea threaten to scupper the Gunners’ move for the Ukraine winger.

Negotiations are ongoing between Shakhtar and both Arsenal and their Premier League rivals over a January transfer.

Mudryk is Mikel Arteta‘s primary target this month and Arsenal have made two bids for the Ukraine winger, who turns 22 tomorrow. 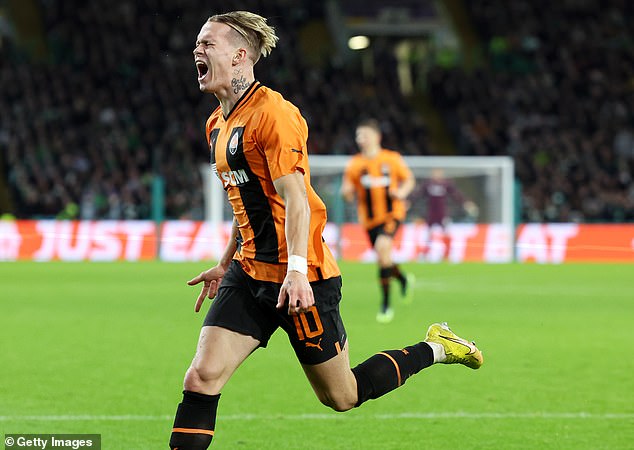 Arsenal returned with an improved offer, understood to be worth up to £62m, and there was optimism that a deal would be agreed in this transfer window. But they could now face competition from Chelsea, who are understood to be exploring a possible move for Mudryk.

Sources in Ukraine have told Sportsmail that, with CEO Sergei Palkin now talking to both clubs, Shakhtar are likely to turn down Arsenal’s improved offer as it remains ‘far away’ from their €100m target.

Darijo Srna, Shakhtar’s director of football, is said to be in England for talks over the coming days. The Croatian visits London fairly regularly, Sportsmail understands, because his family live in the city.

Chelsea are not believed to have tabled their own bid for Mudryk, as things stand, but their interest could force his price up. That is despite the winger making clear his desire to join Arsenal.

Shakhtar see Jack Grealish’s move to Manchester CIty and Antony’s transfer to Manchester United as a barometer for any fee for Mudryk, who was described last week as a potential Ballon d’Or winner by his former manager Roberto De Zerbi.